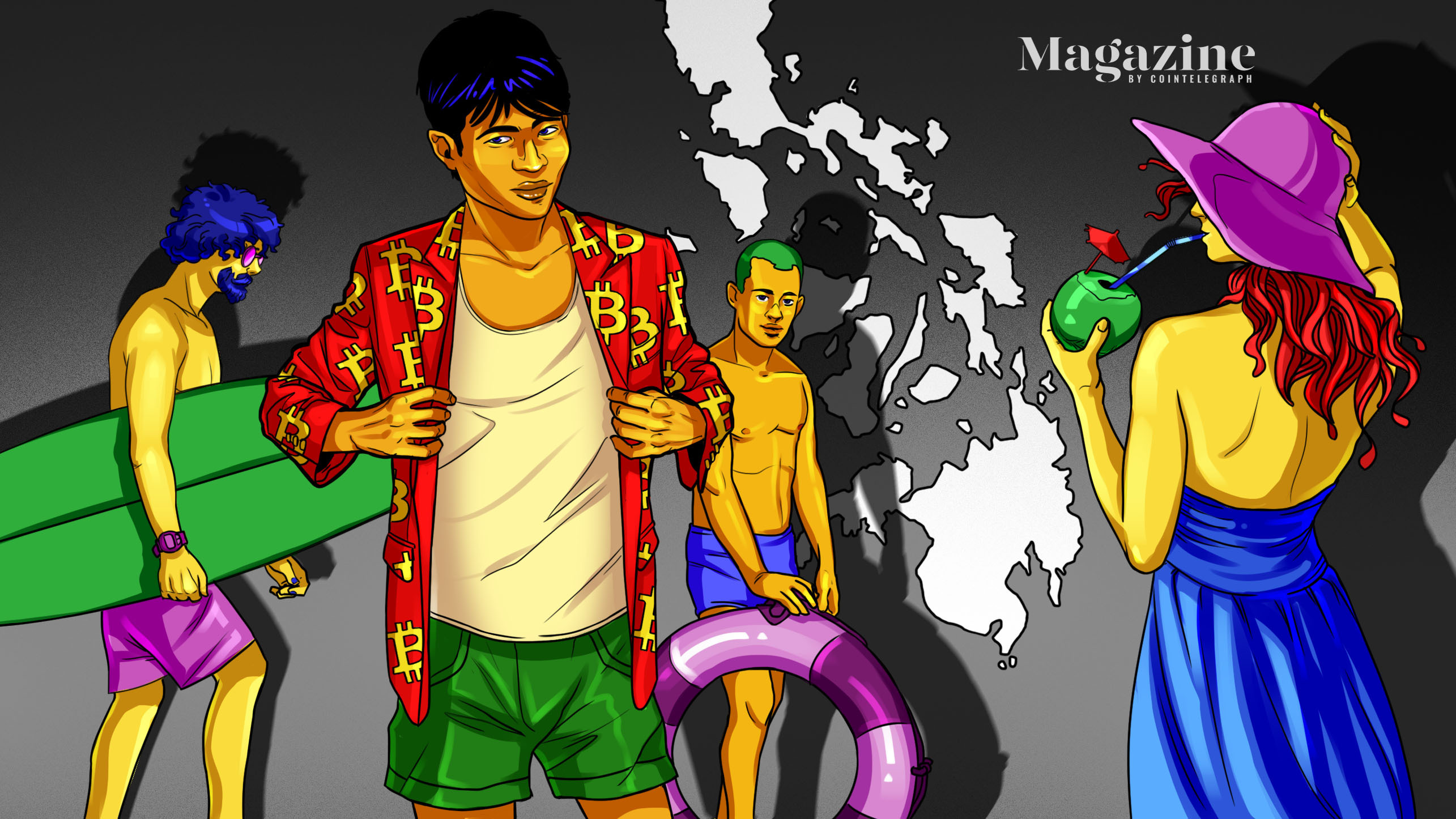 Binance’s Changpeng Zhao describes the Philippines as “one of the most active crypto communities in Asia” and it’s the perfect way to sum up the country’s blend of high adoption amid relatively low affluence.

With GDP spending power of less than $10,000 per head each year, this nation of 7,100 islands is far from a major contributor to worldwide exchange volumes. But in terms of day to day use and enthusiasm, a significant proportion of Filipinos appear to be leapfrogging directly from a cash-based economy to the future of fintech.

The country boasts 17 licensed digital currency exchanges, and tens of thousands of pawn shops and convenience stores happily accept cash deposits and withdrawals for various crypto exchanges and apps. You can buy Bitcoin with cash at any of the 3,000 7/Elevens in the land via Abra, and one in seven adults use the blockchain-based crypto and digital payments app Coins.ph. That’s a level of market penetration comparable to some of the most well-known payments apps in the world.

Crypto regulations are clearly defined and broadly favorable, and special economic zones such as the ‘Crypto Valley of Asia’ in Cagayan, and the Clark Freeport Zone, compete to attract international blockchain projects. In fact, the International Monetary Fund named the Philippines one of the ten best countries in the world in which to develop a blockchain or cryptocurrency project. Widespread high-level English language skills and relatively low wages have also seen Filipino workers become a favored choice as remote staff for blockchain projects.

The growing embrace of fintech and blockchain comes as much from a pressing need to modernize as anything else. It’s still a cash-based society where 71% of adults don’t have a bank account. Even before the pandemic, one in five people lived below the poverty line, with many relying on cash in hand jobs and living from day to day.

But with more active cell phone connections than people, there are big opportunities to change the game. By 2019, 10% of the population was already using cryptocurrencies to make payments. Leah Callon-Butler, the director of Emfarsis Consulting in Clark, says fintech can dramatically change lives in the country:

“People are just like, ‘Whoa, mind blown — this is going to save me half a day because I don’t have to go all the way to the bank during business hours and take three journeys on public transport and then wait in line for an hour and cash the damn thing and then go all the way home. I could do this on my phone.’”

Callon-Butler was herself unbanked when she arrived in the Philippines in 2018 to work with the local staff for an international crypto project. Like many, she turned to the blockchain based Coins.ph platform. “Coins.ph changed my life,” she says, adding: “I realized I could use it to deposit Bitcoin or Ethereum and I could buy mobile load, I could pay bills, transfer money to other people, it was just a lifesaver. It’s very easy to use and very customer centric.”

In the past two years alone, Coins.ph claims to have doubled its user base to 10 million people, out of a total adult population of 72 million. Founded in 2014, it seeks to make digital transactions easy, with users able to sign up quickly with a mobile phone, email address and ID selfie and then withdraw or deposit cash at 33,000 retail partners. The app offers banking, bill payments, remittances and online shopping, all using either pesos or cryptocurrency.

A spokesperson for the company told Magazine that more people had started using the platform since the beginning of the pandemic: “We’re starting to see a positive shift as digital payments gain traction – a trend accelerated by the global pandemic,” they added: “More people are adapting to crypto, online banking and more.”

Blockchain is also helping undercut the high cost of remittances. Around 10% of the GDP of the Philippines comes from the 10 million expatriate Filipinos who work overseas and send money back home to support their families. But wiring money via traditional routes comes with high fees — an average of 6.9% for a $200 transfer — leaving a big market opportunity for companies including PDAX, BloomX, SendFriend, Rebit and Coins.ph to transfer funds for a fraction of the cost using crypto, that can be withdrawn as cash at thousands of shops. The spokesperson says:

“We’re seeing growing interest amongst users in using crypto as a convenient option to transact – particularly cross-border. We see digital remittances – including blockchain-based remittance – as a significant opportunity. COVID-19 is a key driver of the growth we’re seeing, but we expect this trend will continue beyond the pandemic.”

Coins.ph would not provide a breakdown on the number of users who transact in cryptocurrencies, versus those who use fiat. But Mike Mislos, founder of the local Bitpinas crypto news website, estimates that it’s a significant proportion. “I’m also part of some groups on Facebook and like half the people are using it for normal financial transactions and half the people are also using it for cryptocurrencies,” he told Magazine.

The increase in user numbers at Coins.ph comes in the context of a wider drive to overhaul the economy. Realizing how inefficient the current cash-based, unbanked economy is, the Bangko Sentral ng Pilipinas has unveiled an ambitious roadmap with a goal for 2023 of getting 70% of citizens a bank account, and switching 50% of retail payments to digital.

The pandemic has accelerated progress on this front, due to the “general community quarantine” and “enhanced community quarantine” restrictions that have kept many people at home since March. Around 14 million people in Manila have been under strict rules for almost eleven months now with the latest deadline due to expire, and likely extended once again, on January 31. The Philippines has seen half a million cases and just under 10,000 deaths.

“It appears the target has been accelerated because of the pandemic because there’s absolutely no choice but to do the transactions online because of lockdown,” as Mislos explained.

One of the most well-known companies is Satoshi Citadel Industries which has been developing its blockchain ecosystem since 2014. Services include remittances (Rebit) crypto purchases and a wallet (Buy Bitcoin, BTC Wallet) and international stock purchasing platform (Keza).

Even Binance is making a push into the Philippines, having hired Coins.ph’s former head of cryptocurrency Colin Goltra as country director, and launching P2P Bitcoin trading with pesos in the summer of 2020. Binance also acquired a local payments company Swipe, to launch crypto to fiat credit cards in various regions around the world.

Mislos says there was probably more interest in crypto in the Philippines than elsewhere in the region, with the exception Singapore and Vietnam. He cites favorable regulations, including a regulatory sandbox for emerging companies, as part of the reason. “I think more people are interested in cryptocurrencies than other countries here in South East Asia,” he says, adding:

“The regulations from the central bank are more welcoming. I don’t think there are many more countries in the world who have as much potential and regulatory clarity at the moment as the Philippines.”

In July, Union Bank teamed up with exchange PDAX to enable everyone, including the unbanked, to invest in retail Treasury bonds with as little as $100 via blockchain at Bonds.ph. The government is also in the process of fine turning regulations with the Blockchain Digital Technology Act.

But not everything is full speed ahead for cryptocurrency in the Philippines. While the central bank has seriously examined a CBDC or ‘digital peso’ it recently shelved plans to launch one until at least 2023.

There was also considerable excitement in 2018 over a partnership between a developer and the Cagayan Economic Zone Authority to build the ‘Crypto Valley of Asia‘, situated about 400km north of Manila. While dozens of international blockchain and fintech companies have reportedly received licenses, and an $80 million airport was announced in early 2020, things have gone quiet in recent months.

“During this pandemic, I don’t think they are able to focus on that,” Mislos says. “But the last time I checked they were still on.” So it seems this will be a long term project, with three phases planned to roll out over ten years.

What does this year hold?

With 2021 already upon us, will this year see an improvement in the country’s fortunes? Sadly, the signs don’t appear that promising with Moody’s Analytics predicting that due to “deep recession and uncertain fiscal support of policy makers”, the Philippines will be the last country in the Asia Pacific to recover from the pandemic’s economic effects.

Adding to their woes, the Philippines is pinning its Covid-19 relief hopes on 50 million doses of the Chinese made Sinovac, which is reportedly not only less effective than other vaccines, but only a third of Filipinos are willing to take it. So for the time being, the shift to remote work and digital transactions seems to be a necessity rather than a choice.

Part Two of our ‘Crypto in the Philippines’ special report lands next week and looks at the ethics of hiring offshore Filipino employees for international blockchain projects.